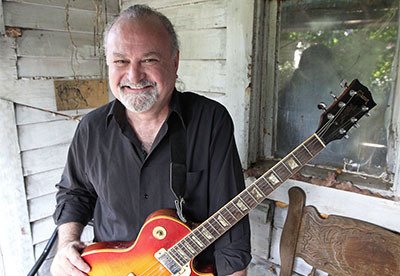 Tinsley Ellis wears his Southern roots proudly. Born in Atlanta in 1957, he grew up in southern Florida and first played guitar at age eight. He found the blues through the back door of British Invasion bands like The Yardbirds, The Animals, Cream, and The Rolling Stones. He especially loved the Kings – Freddie, B.B. and Albert. His love for the blues solidified when he was 14. At a B.B. King performance, Tinsley sat mesmerized in the front row. When B.B. broke a string on Lucille, he changed it without missing a beat, and handed the broken string to Ellis. Tinsley’s fate was sealed; he had to become a blues guitarist. And yes, he still has that string. Averaging over 150 live shows a year, Ellis has played in all 50 states, as well as Canada, Europe, Australia, and South America.